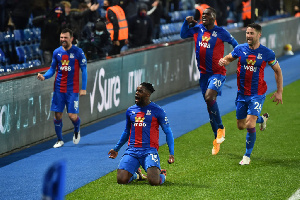 Schlupp playing on the left side of a three-man midfield alongside Cheikhou Kouyate and Will Hughes found the back of the net three minutes from halftime.

Palace’s press from the front caused chaos in Norwich’s final third, Odsonne Edouard’s tricky footwork finally fell to Schlupp, who smashed it into the far corner to make 3-0 at the break.

Edouard had opened the scoring for the Eagles in the 8th minute from the spot after the Silky feet of Hughes in the box drew a foul.

Eddy hit it into the side netting from the spot.

After 38 minutes, Jean-Philippe doubled their lead at Selhurst Park.

Mitchell played a lovely ball down the line to Edouard, who pulled it back for Mateta to beautifully steer home.

‘People Who Act Like This Usually Lease Garments!’ – Most Savage Social Media Reactions...

KATH impasse: We will not stand aloof for GMA to appoint their own to...

Cause Of Death Of Kumawood Actor Agya Manu Revealed- VIDEO