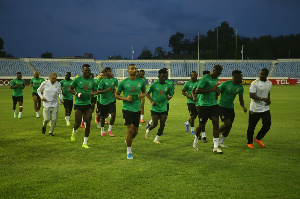 Popular Ghanaian spiritualist and neurologist Prophet Kwaku Gyan, popularly known as Seer Gyan, has predicted doom for the Black Stars in the 2021 AFCON.

The powerful ‘man of God’ who has correctly predicted football events in the West African nation in the past, claims Milovan Rajevac’s side will be knocked out of the tournament at the round of 16 stage.

Ghana has pitched camp in Doha, Qatar, preparing for the 33rd edition of the AFCON which will involve 32 countries.

“The end of the road for the Black Stars will be the round-of-16. They won’t get beyond that stage. I repeat. They won’t reach the quarter-final,” he told Enoch Worlanyo on Asempa FM’s SportsNite show.

As of Wednesday morning, only 13 players out of the expected 28 had reported to the team’s camping base which is the Aspire Academy facility in Doha.