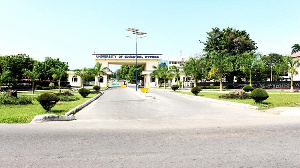 Entrance to the University of Education Winneba campus

The Sports Directorate of the University of Education Winneba (UEW), has organised a four-day retreat for its honorary coaches at Tutu Akwapem in the Eastern Region.

It was to orient and equip newly appointed staff on various aspects of their work, review the Sports Directorate activities for the 2020-2021 academic year, and draft the framework for engaging Colleges of Education affiliated with UEW on sports and recreation.

The four-day retreat was on the theme “Charting a new era of sports and recreation in UEW”.

Speaking at the opening ceremony, Acting Vice-Chancellor of UEW, Professor Andy Ofori-Birikorang urged the Sports Directorate to re-project a new era of sporting activities at UEW in a manner that would include staff and other members of the University.

According to him, sports could be used as a tool to brand the University.

“Recently, management approved a programme for the Directorate for athletes who turned up for weekend trainings to have free breakfast and approved the camping clinic for coaches to assess the fitness level of athletes,” Prof. Birikorang revealed.

He stated that the upgrade of the Amalgamated Sports to a Directorate, indicated the excellent work done over the years and assured the Directorate of the appointment of more coaches to augment the existing number when financial clearance was given.

The Acting Vice Chancellor also assured participants of improving the sporting facilities including the athletics oval at the University hall and construction of more facilities at Ajumako campus.

He urged the honorary coaches to support the team to bring more laurels and glory to the University.

For his part, the Chairman of the Sports Directorate, Dr. Kwame Kyere Diabour, outlined several activities that the Directorate would undertake in the coming academic year.

They would include developing and implementing a programme of activities to involve staff of the University in friendly matches, evaluation of sports facilities in line with its responsibility to the Corporate Strategic Plan- 2019-2023.

Also, a refresher course for appointed honorary coaches and auxiliary staff and organising a capacity building workshop for its staff in the first semester were in the pipeline.

The others are a committee to review the sports policy to conform to the new UEW statutes, the continuation of the enhanced weekend training programme and collaborate with the Institute for Teacher Education and Continuous Professional Development and the affiliated colleges of education to nurture talents at the Colleges of Education.

He said, the presence of the VC had brought joy and energized members ahead of the coming academic year.

We were being not influenced to protest