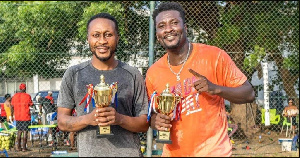 A photo of Asamoah Gyan and his senior brother Baffuor Gyan

The duo were in superb form as they strolled to victory at the Army Officer’s Mess Tennis Court.

Gyan, Ghana’s all-time leading scorer has not hidden his other talents, and last year reached the final of the Accra Open. This year he was beaten by Richard Ogum in the semi-final of the men singles event.

The former Sunderland and Rennes attacker is yet to hang his boots but uses his free time to enjoy other sports.

Asamoah Gyan missed out on Ghana’s Africa Cup of Nations squad for the first time since 2008.

He is expected to make a return to football in January for a final dance before officially retiring from the sport that has earned him worldwide recognition.

My relationship with Stonebwoy not the best – Samini