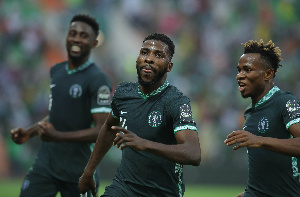 Nigeria beat Egypt to begin AFCON on a high

Defending champions, Algeria began the matchday against Sierra Leone in a Group F , where the Desert Foxes were held to a disappointing draw by the Leone Stars of Sierra Leone. The second game in the group will be played on Wednesday, January 12, 2022.

In Group D, dominant Nigeria were too good for Egypt as the Super Eagles recorded a narrow victory over the Pharaohs. The scoreline could have been more had the Nigerians taken their chances.

Sudan in the other group game shared the spoils with Guinea-Bissau. Sudan escaped a late defeat after goalkeeper Ali Abu-Eshrein saved Pele’s 82nd-minute penalty to aid the Falcons of Jediane a point. The goalie went on to win the man of the match.

Nigeria lead the group with three points with Guinea-Bissau and Sudan sharing the second and third spot with a point each. Egypt, the most successful country of the tournament, is fourth following their opening defeat.

Today, January 12, 2022, three fixtures have been lined up for matchday four of the tournament. The game day starts with an intriguing Group F clash between Tunisia and Mali at 13:00 kick-off time. Mauritania will take on the Gambia in a late afternoon kick-off.

Equatorial Guinea and Ivory Coast will wrap up the day. The Group E fixture will complete the first round of games in the group stages.