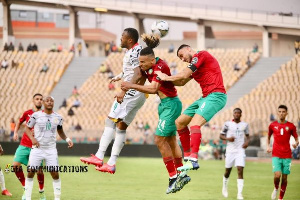 The Black Stars lost to Morocco by a lone goal

Some Ghanaians have expressed disappointment in the performance of the senior national team, the Black Stars team after their defeat to the Atlas Lions of Morocco in the ongoing Africa Cup of Nations (AFCON) in Cameroon.

It seems Ghanaians have lost interest in the activities of the national football team after huge investments in the team for the AFCON.

On the streets of Osu, in Accra, some Ghanaians in an interview with the GNA Sports condemned the performance of the team and that of Black Stars Coach, Milovan Rajevac.

Mr. Seth Okine speaking to the team said, “the Black Stars needs to be reshuffled in order to bring in more local players”.

He described the team’s performance yesterday as a disgrace to the nation and urged the Black Stars Coach to always make selections on his own without the influence of football authorities.

“You could see that the time he changed Jordan Ayew wasn’t the best, he should have changed him immediately they came into the second half because he was our problem.”

“Going forward, the coach should play Fatawu and Maxwell Abbey rather than playing some senior players who aren’t willing to die for the country”.

Ghana is now third in Group C and would be looking forward to performing better than what they did going into the game against Gabon on Friday.

Ghanaians would once again keep their hopes high in the Black Stars and they are expected to pick up six points against Gabon and Comoros in order to sail through from the group stages of the competition.

We are all happy for him

2021 AFCON: Cautions received in group stage to be waived off