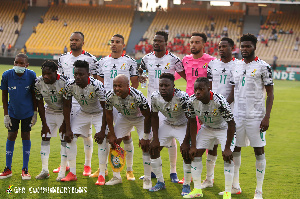 Some Ghanaians have thrown their support for the Black Stars ahead of their second Group C African Cup of Nations (AFCON) game against the Panthers of Gabon on Friday.

The Black Stars of Ghana lost by a lone goal in their opening game against Morocco on Monday.

Some fans speaking to GNA sports in an interview shared their expectations in tomorrow’s game.

Daniel Amoh told the news team that “we are expecting a lot from the Black Stars tomorrow. To me they are just wasting our time, the players have to give out their best in the game against Gabon.

“I think Kudus Mohammed’s presence would actually change our game plan, he would be able to cement our midfield for us, so I’m just hoping for a 3:0 win against them.”

Abdul Mohammed also made mention of the coach dropping some key players and introducing new players in the game.

“The presence of Jordan Ayew in the team is really affecting his brother Andre Ayew, the coach should just drop him and replace him with a different striker. I think Black Stars would win the game by 2:0 tomorrow.”

Abraham also urged the Black Stars to stay focused in tomorrow’s game but hoped the presence of Kudus would influence the team.

“All I can say is, the team should focus on tomorrow’s game to help Ghana sail through Group C, now that Kudus is back, I’m hoping he helps the team to defeat Gabon.”

The Black Stars of Ghana would play against the panthers of Gabon. Tomorrow’s game would determine whether the team would qualify to the round of 16 stages of the tournament or not.

Super Clash: Both Kotoko and Hearts coaches are under pressure – Sam Johnson