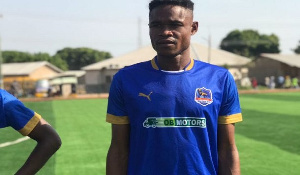 Newly signed Hearts of Oak defender, Richard Kwabena Agyei, has opened up about his move to the Ghanaian giants.

The 19-year-old recently signed for the Phobians from Nkoranza Warriors ahead of the second transfer window following his outstanding performance in the Division One League.

He is expected to fill the void created by Congolese defender Raddy Ovouka who has departed the club to join New Mexico United in America.

Reacting to his move, the enterprising defender said, “It beats my imagination for a big club like Hearts of Oak to sign me.

“Replacing Ovouka is a big challenge and I have to work hard to live up to expectations, there is no pressure on me to deliver,” he said.

I haven’t endorsed Bawumia or anyone as NPP 2024 flagbearer – Prof. Mike Oquaye

Not even rape allegation can hurt Shatta Wale’s brand — Bulldog