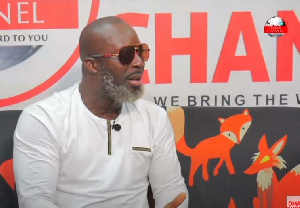 According to Obotan, the bible admonishes men of God to give out items they bless for spiritual directions for free instead of making any economic gains out of it.

“A pastor does not sell oil in the church. You don’t sell in the house of God. When you bless an item, you are supposed to give it out for free according to Leviticus Chapter 27 verse 28,” he said on Oman Media.

Describing pastors who sell anointing oil as business pastors, Obotan singled out the founder and leader of Heavens Gate Ministries, Prophet Nicholas Osei, also known as Kumchacha, as a culprit.

He challenged Kumchacha to dispute his claim.

What I am saying is that every pastor who sells is not a man of God; you are a businessman. If Nicholas Osei [Kumchacha] stands somewhere and claims he has never sold anointing oil, God will punish him. I have been to his church before, and I didn’t buy his oil because I had no faith in it. He can’t challenge that he sells oil at his church,” he added.

Prophet Obotan was popular back in the day as a prophet said to have the power to perform miracles.

However, he has, over the last few years, confessed to being a false prophet back then who used evil power and trickery to dupe unsuspecting-desperate Christians.

In 2020 he joined forces with the Member of Parliament for Assin North, Kennedy Agyapong, on a crusade to expose pastors they tagged as fake.

Appearing on NET2 TV’s the Seat Show hosted by Justice Kwaku Annan, Obatan made several revelations about the activities of false prophets and how he used to ply his trade back in the days.

This Is Not Nice – Movie Of Afia Schwar Exhibiting Off Her Tummy Tuck...

Crop scientists at UCC suggest fruit day calendar for the consumption of fruits to...