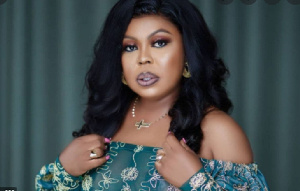 Two members of the ‘Mafia gang’, Tracey Boakye and Diamond Appiah, have paid a visit to their fellow team member, Afia Schwarzenegger’s home to mourn the death of her father.

In a video making rounds on social media, Diamond Appiah and Tracey Boakye were captured in their friend’s home, consoling and offering her hugs.

Afia Schwarzenegger was seen with puffy eyes, a clear indication that she has been crying her eyes out or not having enough sleep.

Few days ago on January 17, 2022, Afia Schwarzenegger announced the passing of her father on social media after battling cancer for a while.

The comedienne who appears traumatized has since been posting fond moments with her late father which includes pictures and videos on Instagram.

The name ‘Mafia gang’ was adopted by the ‘three musketeers’ (Tracey Boakye, Afia Schwarzenegger, and Diamond Appiah) in the quest to prove their strength despite several efforts by certain individuals to break their friendship.

They adopted the name during their banter with Ayisha Modi on social media sometime in October 2021.

Coming up: The Probe discusses the Doctors and Laboratory Scientists turf war