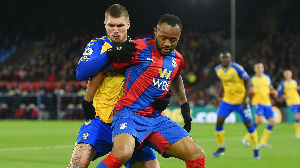 Jordan Ayew trained with his teammates on Friday morning with manager Patrick Vieira set to include him in the squad for the big game.

The 30-year-old attacker is looking at putting a terrible AFCON behind him as he concentrates on his club career in England.

“We don’t know, we still have a couple of days before the game. He was in today and took part in the first part of training. We will have a discussion tomorrow [Saturday] to find out how he’s feeling,” said Vieira following the arrival of the forward.

Jordan Ayew has been an integral member of Crystal Palace this season, having made 19 appearances and scored a goal in the Premier League.

His return is a huge boost for the Eagles as they face a Liverpool side without Mohammed Salah and Sadio Mane.