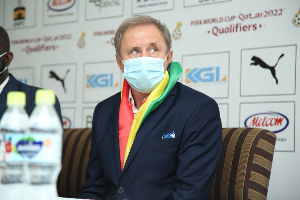 Just four months after taking over as Black Stars coach, Serbian trainer Milovan Rajevac has been sacked after a poor run that saw Ghana exit the Africa Cup of Nations at the group stage.

In eight games in charge of the Black Stars, Milovan Rajevac won only three, lost three, and drew two after replacing Charles Akonnor in September 2021.

Under the coach, Ghana had it worst ever Africa Cup of Nations campaign, after failing to win a single game at the tournament in Cameroon.

The Black Stars will find out their opponents for the play-offs of the World Cup today, January 22.

However, the 2010 AFCON final coach will not be in charge of the West African powerhouse.

Meanwhile, the GFA will be in a hunt for a new coach, their third since the Kurt administration took over office.

Baffour Gyan ‘is my next god’