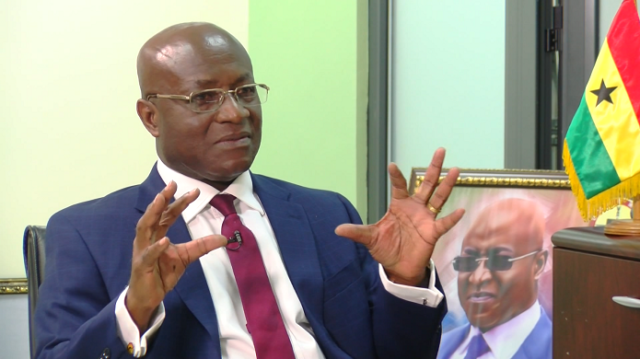 Majority leader Osei Kyei-Mensah-Bonsu says, he is baffled by the statement that the e-Levy, as contained in the 2022 budget statement, has not been approved by the Parliament.

According to him, the levy was not only approved, when the motion to approve the budget was adopted in Parliament, but it was included in the Appropriation Bill which was passed unanimously by the House.

Addressing a capacity building workshop organized for the Majority Caucus in Parliament and some Ministers of State, on January 22, Mr. Kyei-Mensah-Bonsu said that “it is a difficulty for me when people are kicking against the e-levy when you know that in the adoption of the motion to approve the budget, we approved of that. So, it means that the first step has already been surmounted.”

He added “then the e-levy has been factored into the various estimates that we have approved for all the sectors. That is the second thing we did. The third step is when we encapsulated everything into the Appropriation Bill and passed the Bill unanimously. What does it mean, you have approved of the E-levy.”

Mr. Kyei-Mensah-Bonsu explained that the outstanding step to complete the process for e-Levy to be implemented is to back the policy with the enabling legislation.

“So when we have done all these three and turn around and say that you (Members of Parliament) are opposed to the Bill then perhaps you didn’t know what you were doing,” he said.

Debate on the E-levy Bill was halted on December 20 after proceedings in the House turned chaotic with the MPs engaging in a fight during a headcount on whether or not to accept the Bill under a certificate of urgency.

The House hoped that suspending the discussions after the brawl would allow for further consultations on the E-levy Bill.

Parliament will be reconvening on January 25 and members are expected to deliberate and vote on the Bill.

Meanwhile, Finance Minister, Ken Ofori-Atta has said that government officials will from Thursday begin public sensitization across the nation on the need for the introduction of the e-levy.

Speaking at a press conference on Wednesday, January 19, 2022, Ken Ofori-Atta said the move is necessary to communicate the benefits of the levy to Ghanaians.

According to him, officials from the government, including himself, will embark on the public sensitisation exercise to drum home the necessity of burden-sharing for Ghana’s development.

Citing Bloomberg’s report on Ghana’s economy, he said approving the e-levy would help address the issue of the downgrade of Ghana’s credit rating from B to B-.

Mr. Ofori-Atta also noted that the levy would be the driving force to move the country towards a more sustainable debt level.

He added that the levy would serve as a means to make Ghanaians contribute to help develop the economy.

“E-Levy also provides a means for all Ghanaians to help support their country and grow this economy as complaint citizens giving to Caesar what belongs to Caesar.

The new Ashanti Regional Hospital at Sewua in Pictures

Kumawood stars turn up in their numbers to commiserate with Bill Asamoah as he...

The de-duplication exercising by the EC What does it suggest? [ARTICLE]

God’s anger on Akufo-Addo for deciding on to develop a Cathedral as a substitute...

VIDEO: Akuapem Poloo Pleads With Ghanaians To ‘Attend To’ Moesha Buduong, Who Seems To...