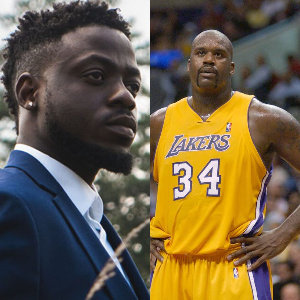 Nektunez wins over Shaquille with his ‘Ameno’ remix

Shaquille boogies in a suit to ‘Ameno’

The Ameno Amapiano remix was the number one song last Christmas that trended on social media with everyone chanting to Goya Menor’s “You want to Bamba.”

The original song by Ghanaian record producer and singer, Nektunez had on board, Nigerian hypeman, Goya Menor for its remix.

The viral song enjoyed massive airplay and streams with several TikTokers using it for their videos.

The song which goes with the lyrics: “You want to bam ba. You wanna chill with the big boys. Na you dey run kiti kiti. You dey run keta keta. No fit drink water drop cup. Dorime,” was produced by a Ghanaian with a Nigerian adding his vocal.

Surprisingly, music lovers in Ghana had no clue that one of their own, Nektunez was behind the song that has received massive support from Nigeria where it continues to top Charts.

The Ghanaian record producer, singer, songwriter, and mix mastering engineer, Nektunez who is based in Atlanta, USA has for years been making mind-blowing tunes.

He has however lamented the lack of support from his country especially at a time where he has musically put Ghana on the map.

NDC bribed some of our members to vote for Bagbin – Kyei Mensah Bonsu...

There is too much uncertainty in the business environment – Twum...