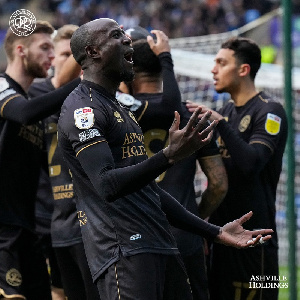 Adomah restored Rangers’ lead with his second goal of the season

Albert Adomah’s second goal of the season gave QPR a late 2-1 win at Coventry to boost their promotion hopes in the Championship.

The Ghana international headed home Chris Willock’s cross in the 88th minute to seal a fourth straight win for the west London side.

QPR are now two points behind second-placed Bournemouth with a game in hand.

Willock also set up the opening goal for Andre Gray, threading through a clever pass for the on-loan Watford striker, who fired home.

Jordan Shipley hauled the Sky Blues level with a cracking strike from near the edge of the penalty area five minutes into the second half.

But Adomah restored Rangers’ lead with his second goal of the season.

CHAN 2022: Black Galaxies to get $2 million if they win tournament

I had to write 4 verses to choose which suits the Bob Marley feature...