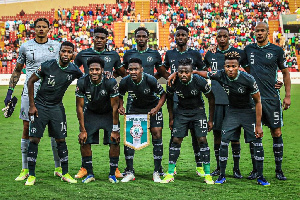 The Super Eagles were unbeaten prior to the Tunisia game

Ghana’s 2022 World Cup play-off opponents Nigeria suffered a shock exit at the 2021 Africa Cup of Nations when they were defeat 1-0 by the less-fancied Tunisia in Garoua on Sunday.

The Super Eagles, who were tipped as favourites for the competition, were stunned in front of their own supporters in the neighbouring Cameroonian city.

The Carthage Eagles upset 10-man Super Eagles to reach the quarter-final where they will face Burkina Faso.

The result means the Nigerians ended just one step ahead of Ghana that finished their campaign at the group stage of the competition.

Youssef Msakni beat Nigeria goalkeeper Maduka Okoye with a long-range effort two minutes into the second half to end the Super Eagles hopes of winning the title.

Nigeria’s task was made harder when Alex Iwobi was sent off following a video assistant referee review.

The West Africans were the only side to win all three group games in Cameroon, but were largely subdued against a side hit by Covid-19.

Tunisia, Nations Cup winners in 2004, will face Burkina Faso in the last eight on Saturday, 29 January.

My beef with Eno was to hype her and have entertaining