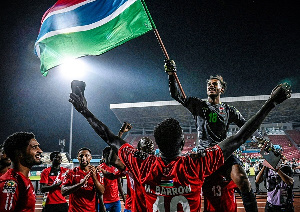 The round of 16 stage of the 2021 AFCON is two matches away from being complete after the games kicked on Sunday, January 22.

On Sunday, Burkina Faso edged Gabon in a close contest where the Burkinabe need a penalty shoot to progress at the expense of 10-man Gabon.

Whereas in the second game, Tunisia stunned tournament favorites Nigeria thanks to Youssef Msakni’s stunning strike did the magic for the Carthage Eagle as they clipped the wings of the Super Eagles.

On Monday, Gambia made history after beating Guinea 1-0 to progress into the quarter-finals on their debut AFCON. Musa Barrow’s 71st-minute strike was enough to write history for the Scorpions.

All attention turned to the last game of the day with many wondering how Comoros would fare against firing Cameroon with all three goalkeepers unavailable due to COVI-19 and injury. Left-back Chaker Alhadhur put on the gloves.

Unfortunately for Comoros, Nadjim Abdou got sent off after just 7 minutes into the game. However, they contained Cameroon until the 29 minutes when Karl Toko Ekambi broke the deadlock. Vincent Abounakar added another in the 70th minute to put the Indomitable Lions in cruise control.

Comoros managed to pull one back after Youssouf M’Changama scored an incredible long-range effort. Chaker dominated the headline with his double save in the course of the game. The newcomers lost the game 2-1 and earned the praises of football fans for putting up a good fight regardless of their situation.

Meanwhile, Aboubakar’s goal in round 16 takes his tally to 6 goals and sits comfortably at the top.

The round is four games away from complete. Senegal takes on Cape Verde at 4PM while Morocco face Malawi at 7 PM.