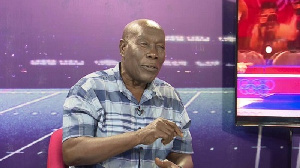 According to the 1963 AFCON winner, the current team should be dissolved and rebuilt with committed players.

“Unless we collapse the team and recruit new players that will be committed and play their heart out without thinking about money,” Mfum told Bryt FM.

He continued that after recruiting the committed players, the team should be camped for months ahead of a major tournament.

“We have to recruit players and camp them for months because, during our time, we left our wives home to sleep on student beds at the Accra Sports Stadium, we were not discouraged about this, so we fought and win the AFCON in 1963,” he added.

The Black Stars have been chasing a fifth AFCON trophy since 1982 with their recent try in Cameroon ending in a group stage exit.

Ghana failed to record a single at the 2021 edition of the tournament as many have suggested ways of rebuilding the team after yet another failure.

The Black Stars, therefore, recorded their worse AFCON tournament and their first exit since 2006 after finishing bottom of Group C behind Morocco, Gabon, and Comoros.

Assin North’s annulment is a travesty of justice – Haruna Iddrisu