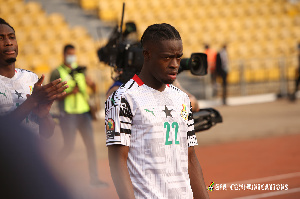 The Black Stars recorded their worst ever AFCON campaign in the country’s history after finishing bottom of their group without winning a game and exiting at the Group stages.

The France-based forward, however, failed to live up to expectations and admitted the below-par performance saying the tournament has provided him with a learning curve opportunity.

“My first dance at Afcon started on the wrong foot with performances as a team beyond embarrassing but very grateful for my debut in this prestigious tournament,” he wrote on Instagram.

“A very tough experience with so many learning curves. Things didn’t go as planned and we have ourselves to blame as a team.

“Sincere apologies. No excuse or apology is enough for Ghana deserves better. Giving up is never an option, we will be back and I mean we will back!”

“Thank you for the unrivalled support & kind messages.”

Tall Checklist Of Ghanaian Pastors Who Are On Their Knees Begging Kennedy Agyapong Not...