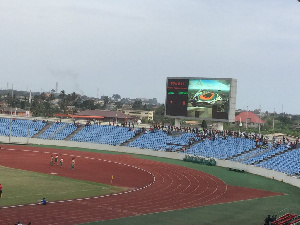 Cape Coast Stadium ruled out in Ghana vs. Nigeria game

The stadium will host the Independence Day celebration

This was disclosed by NSA

The Cape Coast Stadium that has hosted the Black Stars in recent times during most of their crucial games will not be available for their World Cup qualifying play-off against the Super Eagles of Nigeria, the National Sports Authority (NSA) has disclosed.

This is because, the State Protocol at the Jubilee House intends to hold Ghana’s 65th Independence Day celebration at the said venue on March 6.

In a letter to the Ghana Football Association, the Director-General of the National Sports Authority, Prof. Peter Twumasi, stated that the Cape Coast stadium will be closed down to sporting activities to enable exterior and beautification works to be done for the Independence Day celebrations.

“I respectfully write to you to inform you of the decision by the State Protocol at the Jubilee House to hold this year’s Independence Anniversary Celebration at the Cape Coast Stadium on 6th March 2022.

“By this letter, the Ghana Football Association is accordingly informed of this decision and advised to resort to other venues preferably the Baba Yara Sports Stadium and Accra Sports Stadium respectively for the March 2022 FIFA World Cup playoff qualifier between the Black Stars of Ghana and the Super Eagles of Nigeria,” the letter read.

Ghana’s Black Stars will play the Super Eagles of Nigeria in the 2022 World Cup play-offs.

The draw, which was done in Cameroon on Saturday afternoon, will see the West-African sides face off in a two-legged tie for a place in the next World Cup in Qatar.

In the final group qualifying match, the Black Stars of Ghana edged Bafana Bafana of South Africa 1-0 to book a place in the playoff, while the Super Eagles of Nigeria topped their group after a 1-1 draw with Cape Verde in their final group match.

The final round of the World Cup qualifiers will take place between 24-29 March, 2022.

SOS supports 103 caregivers to venture into Agriculture, others