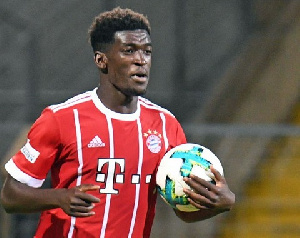 The German-born attacker has left the Dutch club to sign for German Bundesliga 2 side Holstein Kiel.

It brings his short spell in the Netherlands to an end having only signed for Willem II in 2020.

At Holstein Kiel, Kofi Okyere Wriedt has been signed to help the club fight for promotion to the German Bundesliga.

He is an established goal scorer who scored more than 15 goals for his club in the Dutch lower-division last season.

Although he is yet to hit double figures in terms of goals this season, Willem II are confident he will be able to bang in the goals for the team in the absence of Kwasi Okyere Wriedt.

We are humbly waiting for the promise