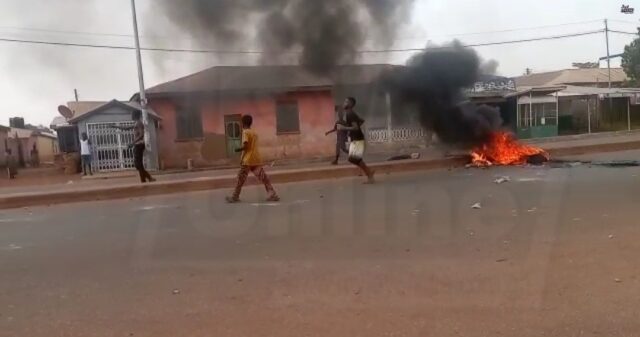 The angry youth of Lamashegu burnt tyres on the principal streets of Tamale Metropolis on Sunday, February 13, 2022 during the clash with the police.

Security Analyst, Adib Saani has called for a transparent investigation into the shooting incident at Lamashegu which led to the death of one person and seven others injured.

Speaking to JoyNews on Monday, Adib Saani urged the Ghana Police Service to punish officers who would be found culpable in the shooting incident.

“The investigation has to be transparent and hopefully we don’t end up with another case similar to the zongo guys who were killed last year near Kumasi. I’m hoping that this time around if they find some level of culpability, the officers may be made to face the full rigours of the law,” he said on The Pulse.

This, he said will build trust between the police and civilians and dismiss the claim that police officers are above the law.

According to him, the Service must review its training programme to include more of training on deescalating violent situations.

“A lot of the cases in the media that involve police brutalizing civilians has got to do with lack of experience or perhaps training because in many situations they lack a lot more of the democratic policing bit,” he added.

The disturbance which occurred on Sunday, February 13 is reported to have erupted when a young man who was being pursued by the police dashed into the Lamashe-Naa’s palace to avoid being apprehended.

Speaking to JoyNews, an eyewitness said the young man was being chased for driving an unlicensed vehicle.

However, while running into the Palace, the Police allegedly shot him, causing the riot.

One person has been reported dead so far while seven others have sustained various degrees of injuries.

The Police Service has since interdicted six officers for their roles in the clash between the youth of Lamashegu and the Police on Sunday.

This follows an initial investigation conducted into the clash. The Tamale Divisional Police Commander, Chief Superintendent George Yeboah Afari, said the police is seriously looking into the matter.

“I will say it is unfortunate. We are all aware of the visit of the Vice President; therefore, I was out within the Tolon District when communication was relayed that a policeman was under attack at Lamashe-Naa’s palace.”

A statement issued by the Public Affairs Directorate of the Police Service announced that a team of investigators have been dispatched to Tamale to look into the incident.

“We are appealing to the people of Lamashegu and the entire Tamale Metropolis to remain calm as the investigation continues into the unfortunate occurrence.”

We will give cost-free legal solutions for musicians, actors and other folks