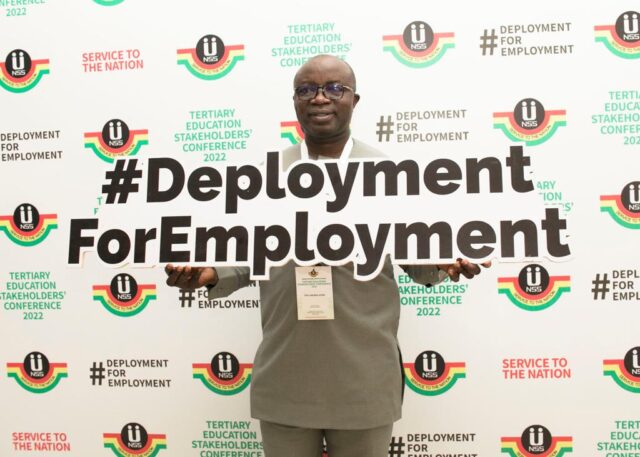 The National Service Scheme has commenced the implementation of a new system to offer more service personnel with skills and hands-on entrepreneurial training to make them ready for the job market or establish their own companies after one year.

The move which is a major boost to complement government’s employment generation agenda is also coming out with an electronic job platform to absorb all completing personnel and appropriately match their skillsets for companies in need of their services.

The Executive Director of the National Service Scheme (NSS), Mr Osei Asibbey Antwi, who announced this at a stakeholder conference in Accra today said currently the scheme is liaising with various user agencies in ensuring that a significant number of personnel who excel are employed after the service period.

The conference which attracted over 300 principals and registrars of both public and private tertiary educational institutions was on the theme “Strengthening GNAA Database Through Digitilisation for Efficient Deployment”.

Mr Osei Assibey said the deployment drive fell within its new vision of not only deploying the personnel but ensuring that they either become self-employed, offering employment for others, and also be ready for employment under the broader scheme of “Deployment for Employment”

Already, the scheme is in collaboration with some tertiary institutions and corporate entities that had led to the establishment of various models such as estate development, computer applications, and software development among others.

Some of the models for training and employment include; Pathways to Sustainable Employment (PaSE) Project Ghana Tech Lab (GTL), which is currently training a lot of service personnel in mobile apps and websites building skills; Venture Building Program which is a grooming Service Personnel with entrepreneurship skills throughout the service year and GNSS.

Ghana Export Promotion Authority is also offering entrepreneurship and other skills required to create products and services which can be exported outside Ghana; GNSS/Ghana Enterprises Agency for the training of Personnel in entrepreneurship and the provision of support in various business fields in the country; the Stanbic Graduate Transition Support Program (GTSP), which is currently providing sustainable financial support system for National Service Personnel in the areas of financial literacy and business development.

Mr Osei Assibey said though the scheme was not deviating from the dictates of Act 426 (1980), it was determined to be innovative in meeting the socio-economic needs of the Ghanaian graduate.

“Over the years, we have traditionally deployed personnel for their national service after which many of them are left without meaningful employment”, he said and added that to close this gap management has engaged the services of a consultant to draft a policy document.

He indicated that over the year’s tertiary institutions have submitted their class list on pen drives, through emails, and hand copy which were susceptible to manipulation, increased potential errors due to multiple desktop processing, delayed processing due to time spent correcting mistakes, and causing stress to the graduates.

He explained that the new NSS digitalised class list submission system offers secured interactive platform for the institutions and the national service for smooth, efficient, and effective to provide secured and real-time data.

The Board Chairman of the NSS, Nee Odoi Tetteyfio, called for closer collaboration with the stakeholders especially the tertiary institutions in ensuring the new direction of the scheme to provide e-platform for collecting information was successful.

This, he explained would also aid in the provision of entrepreneurial and skills set to ensure that the personnel become the next wealth and employment creators for the country

Director-General of the Ghana Tertiary Education Commission, Prof Mohammed Salifu commended the management of NSS and said the new system for the submission of the class list provided a huge resource for policymakers and the business community to rely on in their decisions making process.

Referring to the “Deployment for Employment” policy, he indicated that that was a whole new change of attitude and paradigm shift as far as NSS is concerned.

He enumerated the four-step process which includes creation which bothered on partnership, deployment which covered tools to support the partnerships and the database then training where the support system would be provided for the trainees in terms of entrepreneurship, incubation, development of prototypes, and preparing them for the world of work.

Prof Salifu said the Flair system which is included in the new system was a match-making website for prospective employers meeting employees with the required skills set., adding that there could not be a better platform like this because it would address the needs of the labor market with its one-stop shop.

He welcomed the assurance by the NSS that the training for the registrars would be replicated at the various regional levels and engage them directly so that managers of the various tertiary intuitions would be able to provide the required data.

Time to develop a national hydrogen coverage and roadmap – IES