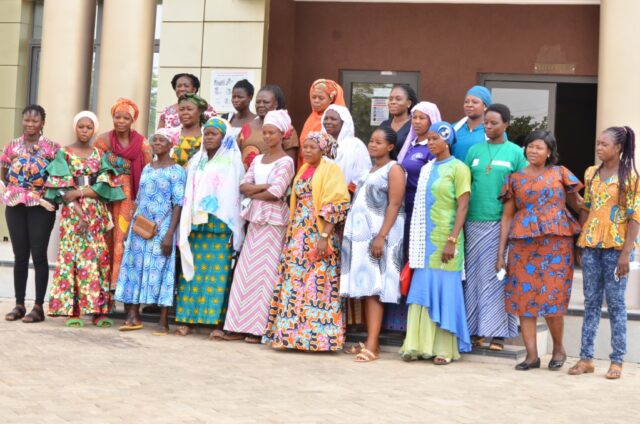 Some women peasant farmers in 8 districts across the country say they are often heckled and sometimes, harassed by their male counterparts in the course of trying to access the government subsidized Planting for Food and Jobs fertilizer.

They say, the male farmers generally underate the importance of the women’s farming activities and therefore do not expect the women to compete with them for the subsidized fertilizer.

The women farmers made the revelations at a gender sensitization workshop on the fertilizer subsidy program at Bolgatanga in the Upper East Region.

The workshop was organized by the Peasant Farmers Association of Ghana [PFAG] in collaboration with the International Budget Partnership and the Women in Agriculture Development [WIAD].

It was aimed at sensitizing women from selected districts to understand some of the provisions of the implementation guidelines of the fertilizer subsidy program.

The workshop was also aimed at helping the International Budget Partnership identify gender issues related to the delivery of the subsidized fertilizer to small holder farmers, particularly women and persons with disabilities.

After group round table discussions to look at their experiences when trying to access the subsidized fertilizer in their various districts, the women cited gender biases, harassment and outright disrespect from their male counterparts and even the fertilizer distributors.

Gilberta Akuka, a farmer from the Bawku West district who led one of the groups in the discussion said the women in her group revealed that they are often heckled and pushed out of the queues when the subsidized fertilizer is being distributed.

“The men know that we are not strong and so when we come to buy the fertilizer at the sale points, they try to push us and then scare us so that we leave [the place] so that they can buy”, she said.

“We really do not have that strength to fight with the men and the input dealers themselves are men so they don’t even try to help us”, Akuka added.

Another woman farmer, from the Gushegu district said during her group’s presentation, the women noted that it was always almost impossible for women to get the fertilizer in their districts, “even when they have the money”.

“Last year, it was difficult to get even 1 bag of fertilizer, even though some of us needed about 15 bags for our farms. If you [a woman] are not strong to fight, you cannot get the fertilizer to buy. The men will push you out of the queue”, she said.

The third group led by Scholastica Atarrah in their presentation also revealed among other things that; “a woman farmer needs to be physically strong in order to get the fertilizer because we have to compete with our male counterparts”.

The women peasant farmers said the solution to the problem is a strict implementation of one of the guidelines of the fertilizer subsidy program which stipulates that 30 percent of all government subsidized fertilizer be allocated to the women farmers.

They also suggest that sales points be set up in every district separately for the women farmers and women be selected and put in charge of these sales points to ensure the 30 percent allocation is adhered to anytime the subsidized fertilizers arrive in the district for distribution.

The International Budget Partnership [IBP] through its budget credibility research, plans to identify gender issues related to credibility challenges associated with the delivery of subsidized fertilizer to small holder farmers.

The research is being implemented by the Peasant Farmers Association of Ghana under the IBP’s Strengthening Public Accountability for Results and Knowledge [SPARK] project in Ghana.

The women selected for this workshop were drawn from the SPARK project districts.

Head of Programs and Advocacy at the Peasant Farmers Association of Ghana [PFAG], Dr. Charles Nyaaba said the information gathered at the workshop will help the association make the right suggestions to government to ensure that the women get fertilizer for their farming activities in the 2022 farming season.

“They said they want women representatives at the peasant farmers [association] to always stand in for them and sign the document before they can access the fertilizer. They also want a sales point so that the women can access their inputs from there. So, to us [WIAD], this is welcoming and we really hope it will help our women farmers”, Adoba said.

PICS: Kanye West Storms Los Angeles Wearing A Bag Over His Head With No...