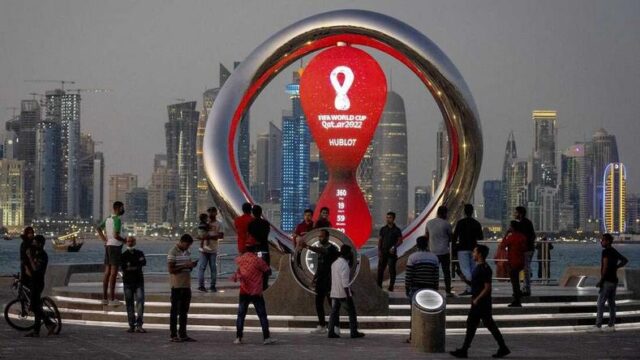 Fifa has asked all 32 competing nations to “focus on the football” and hosts Qatar will kick off the tournament against Ecuador at Al Bayt Stadium (16:00 GMT).

The home nations that have qualified are in the same group and action the following day, with England up against Iran (13:00), before Wales plays the USA (19:00).

Meanwhile, event, organizers announced fans would not be able to purchase or consume alcohol inside or within the perimeter area of any of the eight stadiums but this rule has been relaxed a little for the tournament as fans can purchase a beverage in restricted areas such as the fan park. However, a pint will set you back £12.50.

At 29 days from start to finish (20 November to 18 December), this will be the shortest World Cup since Argentina 1978.

That means organizers have had to schedule four games most days during the group stages and there is no turnaround time between the groups and the knockout stages, with the last 16 starting the day after the group stages end.

A country that has a population of less than three million, Qatar expects to see a total influx of about 1.2 million visitors from around the world over the next month.

Lots of visitors are already in Qatar traveling around the capital of Doha in the days before the opening game, the buzz is palpable with bunting with flags from each competing country lining the streets.

Qatar 2022 will become one of the most talked about and controversial World Cups in history.

Ghana will make their fourth appearance at the FIFA World Cup, each of these coming in the 21st century.

The Black Stars of Ghana are in Group H playing Portugal on November, 24, Thursday at stadium 974 in Doha.

The Andre Ayew-led squad of the BlackStars on November, 28 will play South Korea at the Education City stadium in Al Rayyan and will also be hoping to crash its worst nightmare Uruguay on December 2 at the Al Janob stadium in Al Wakrah.

Asante Kotoko arrive in Sudan ahead of Al Hilal activity