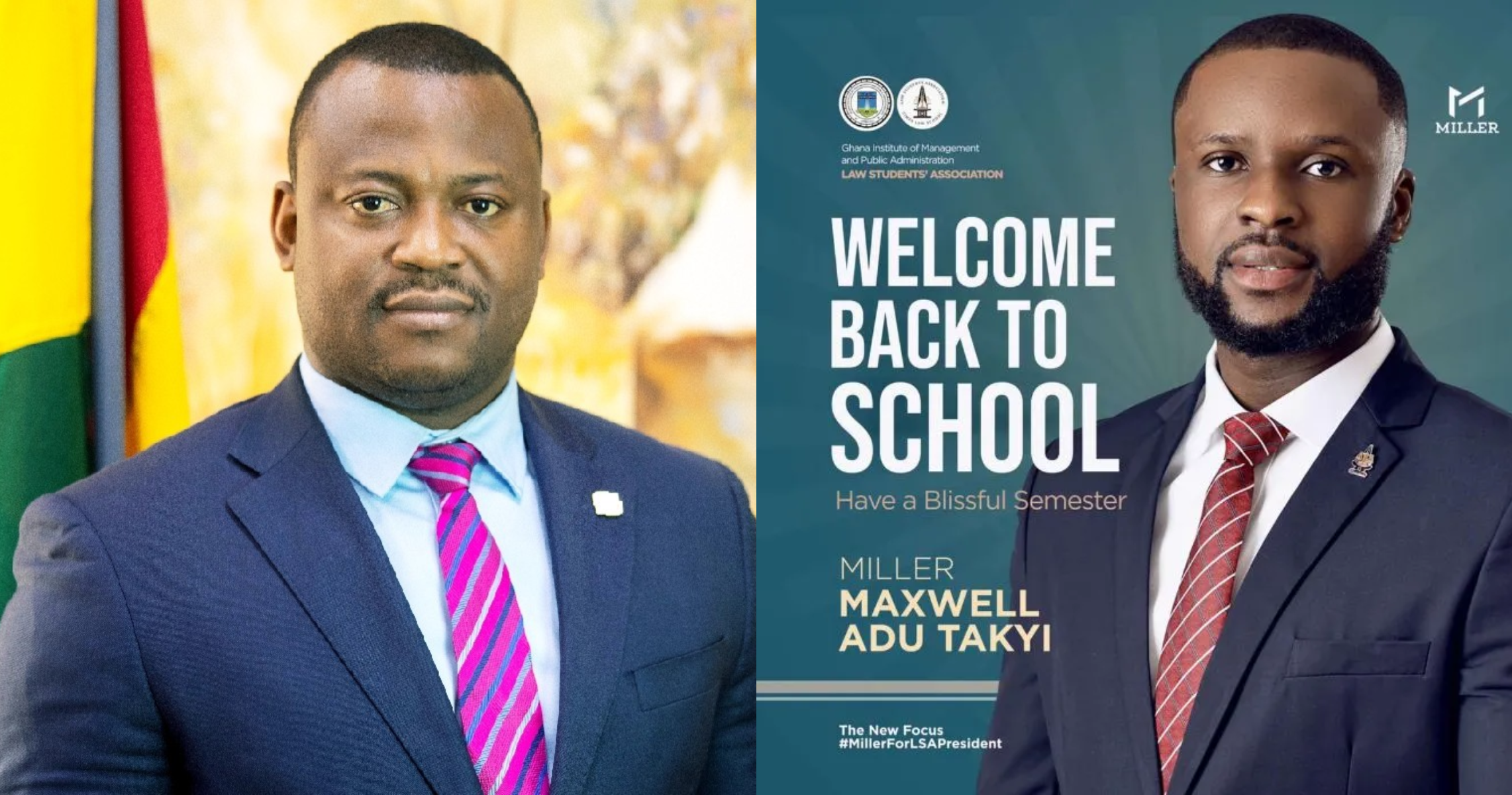 The Inter-faculty committee was constituted by the new Dean of the Faculty of Law, Dr. Kwaku Agyemang-Budu to look into the claims of vote rigging brought by one of the contestants in the election, Michael Adu Takyi, a pro-NPP candidate in the race.

Festus Martey was elected the new President of the Law Students Association of GIMPA but was challenged by Adu Takyi on several claims including over-voting.

Martey won the elections by 67 percent of the total 416 votes cast beating his contender Adu Takyi in the race.

But Adu Takyi disagreed with outcome of the results citing rigging during the elections.

Below is the statement of the claim by the petitioner:

1) The Petitioner is a level 400 student of the Ghana Institute of Management and Public Administration (GIMPA), pursuing a Bachelor of Laws programme and a member of the GIMPA Law Students Association (LSA).

2) The first defendant is the principal legal advisor of the Law Students’ Association.

4) The petitioner contends further that the Electoral Commission (EC), in accordance with Articles 10(1) to 10(4) of the LSA Constitution was constituted.

5) The Electoral Commission conducted the GIMPA LSA Election 2022 which was shrouded in conspiracy with many instances of irregularities reported.

6) On 1st June 2022, following a meeting with management in an attempt to resolve the election concerns of all parties, it was resolved that the election should be held the following day on the caveat that all the aspirants had to meet with the Electoral Commissioner (EC), and should they have any reasonable concerns the EC had to address same before voting.

7) The Petitioner’s experts after analyzing the system found many irregularities bothering the registration, mode of elections, and software issues.

8) Concerns were raised with the EC and unfortunately, it fell on deaf ears. The report of the Petitioner’s expert consulted is tendered into evidence and titled “Election Credibility Report”.

9) During the Election, numerous instances of irregularities were recorded (video recording). The EC did not recognize the PDF as the election results.

Interestingly, all three (3) Electoral Commissioners responsible for conducting and declaring the winners for the various positions contested were conspicuously absent during the hearing. They were however represented by their legal representative.

1)The 2nd Respondent admitted to paragraphs 1, 2, 3, and 4 of the petitioner’s petition.

3) The 2nd Respondent admitted to paragraph 6 in part to the extent that, there was an election run on Wednesday, 1st June 2022 which was rerun on Thursday 2nd June 2022 after the concerns of all interested parties have been resolved.

5) The 2nd Respondent denied paragraphs 8 and 8 as repeated in the petition, denies paragraphs 9, 10, 11, 12, 13, 14, and 15 of the petitions as presented by the petitioner, and says that these are concocted allegations without any merit and puts petitioner to strict proof.

6) The 2nd respondent as mandated by Article 10 of the LSA Constitution on Thursday, 2nd June 2022 duly conducted a most credible election which had the 3rd Respondent emerge as the elected candidate for the President of the GIMPA LSA.

7) The 2nd respondent stated that the election was rerun solely to afford all candidates a fair audit of the system prior to the rerun-on Thursday, 2nd June 2022 and the petitioner never raised any concerns with the credibility of the electoral system but rather submitted himself to the conduct of the election.

8) The 2nd respondent averred that the petitioner never carried out any audit or provided a reason for his failure to audit the system before the election of Thursday, 2nd June 2022 as agreed to by all parties.

9) The 2nd respondent further submitted that no credible, germane audit was carried out by the petitioner or any of his assigns that demonstrated any flaw or insecurity in the entire electoral process carried out on Thursday, 2nd June 2022.

10) The 2nd respondent submitted that the allegations made by the petitioner to seem as facts are untrue, unreliable, irrelevant, and constitute trumped-up allegations crafted to fit the petitioner’s narrative.

11) The 2nd respondent stated that the petitioner by his own admission commissioned at least one unauthorized, hostile actor to interfere with the electoral system while the election was underway leading to the pause of voting in order to safeguard cast ballots and to eliminate any possibility of success in the attempt to alter the votes cast, after which voting resumed.

12) The 2nd respondent submitted that the EC carried out its duties fully and within the stipulation of Article 11 of the LSA Constitution and never fouled any rules governing elections as the results declared depict the true state and nature of the election of executives for the GIMPA LSA.

13) The 2nd respondent with leave of court during the trial shall render evidence and produce all relevant documents where necessary to assist the court in coming to a justiciable conclusion.

14) Wherefore the 2nd respondent denied the claims of the petitioner.

First, during the hearing, the EC Representative was unable to provide the requested evidence which affected the credibility of their claim that the election was free and fair. The representative rather gave excuses to justify the absence of the requested evidence. For instance, he said the systems report was unavailable because the election software vendor had destroyed the data since he had no more contract with the Commission.

The systems report would have helped this committee to compare and verify the election results as generated from the system directly, and that of what was declared by the Electoral Commission as displayed in an editable Microsoft Word document projected on the wall of the “strong room”. The situation we faced is like a paper-based election without “pink sheets”.

a) That the system was deliberately hacked to prevent further voting so that the election results will be declared as is, in favour of one of the candidates.

b) That the presidential election results were swapped to disadvantage the losing candidate. Hence, we could have verified the electorate’s choices – albeit anonymously.

Second, neither the election software nor its developer was available for demonstration and questioning, respectively. The committee would have done a run-through of the software by undertaking a typical vote and then generating a report to understand the software’s algorithm. Our inability to achieve this cast doubts on the inner workings of the algorithm, especially because some of the candidates did not have the opportunity to conduct a pre-election audit of the software – whether deliberately or accidentally.

Third, on the technical difficulties, the committee faced with accessing the software, its audit trail and the

voting data, we suggest a lack of transparency in the electoral process which casts a doubt on the election results.

Though the Committee’s focus was the elections on June 2, 2022, we noted that there were some gaps in the LSA Constitution which are:

• There are no clear guidelines for the election process.

• The LSA Vice President position is independently contested which has the tendency to create an imbalance in the leadership representation.

• The independence of the EC is not well outlined.

FINAL DECISION BY THE DEAN OF THE SCHOOL OF LAW

Acting per the recommendations of the Inter-faculty committee, the Dean of the School of Law, Dr. Kwaku Agyeman-Budu directed as follows:

b. For the avoidance of doubt, the following persons previously elected on 2nd June 2022 as LSA executives are no longer LSA executives and are hereby prohibited from holding themselves as such:

c. An Interim Management Committee (IMC) made up of class representatives from all levels and streams (Day and Evening) is to be constituted immediately to manage the affairs of the LSA until new LSA electives are elected.

Nollywood Actress, Yvonne Jegede Narrates How Her Very own Worker Sacked Her – This...